Our mission at LVL is to provide premium Bitcoin & banking services to our members for an accessible, flat-rate fee. When we decided to offer flat-rate Bitcoin trading in 2019, we were confronted with a dilemma. Any liquidity provider we would buy Bitcoin from for our users would charge fees, and we didn't want to charge any fees to our users. So we embarked on a radical experiment to provide liquidity in a new way no one had attempted before. Instead of relying on a third party liquidity provider, we would allow our own users to provide liquidity through the Yield Farming feature of Autopilot.

By democratizing liquidity providing to our users, we believed we could eliminate the middle man, cut prices for retail users, and drive 100% of profits from liquidity providing back to our own users. The results so far have been promising. Between April 2019 and December 2020, Yield Farmers provided all of the liquidity on LVL with all of the profits going back to LVL users. In December alone, Yield Farmers serviced over $15,000,000 of order volume!

In December we announced that LVL is now free to use. This has driven unprecedented growth in new users and Bitcoin demand. Simultaneously, the skyrocketing interest in Bitcoin has led to more orders, bigger order sizes, and better bids. As a result, the Yield Farming accounts are selling out of Bitcoin, and there are many times when no Bitcoin can be bought on LVL. On traditional exchanges like Coinbase and Kraken, when Bitcoin inventory is running low, the price of Bitcoin increases, creating an incentive for users to "import" Bitcoin from other exchanges and sell it at a profit. This process is called arbitrage, and it is the main mechanism by which exchanges low on Bitcoin recover inventory.

We live in a market-based society, and some inequality is inevitable. Inequality may result from differences in talent, effort, and luck. Rewarding these differences with outsized financial reward incentivizes human resource development and innovation. On the other hand, according to research by the International Monetary Fund, "excessive inequality could erode social cohesion, lead to political polarization, and ultimately lower economic growth."

Since the early 1990's global income equality has declined significantly with hundreds of millions of households lifted out of poverty, particularly in Southeast Asia, China, India, and parts of the middle east. The Gini coefficient, which measures inequality on a scale of 0 - 100, has fallen 10 points since 1995. In advanced economies, including the United States, the trend has been the opposite. According to Pew Research data, between 1970 and 2018, the share of US aggregate income earned by the middle class fell from 62% to 43%, while the share for the upper class increased from 29% to 48%. 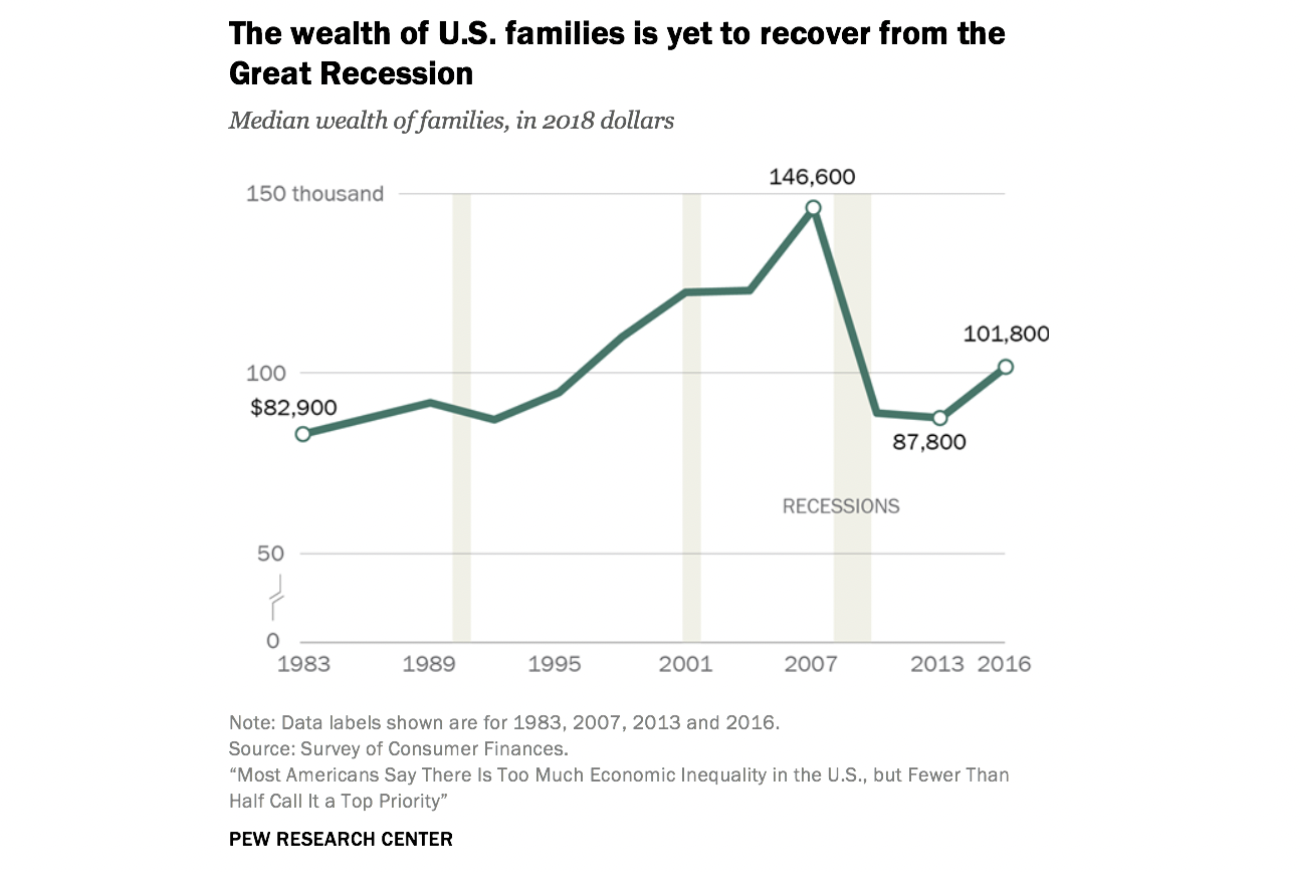 The United States is treading backwards on inequality. This can be partly and reasonably attributed to the boom in information services jobs such as software engineering and medicine. However, the transition to the information economy does not alone explain US inequality today. For example, the S&P has rebounded 380% since the Great Recession, while household wealth has recovered only 18%. This disparity highlights the leading driver of financial inequality in the United States: structural disadvantage in the financial markets.

Millennials are pissed off that previous generations have increased the national debt, destroyed the dollar’s purchasing power, gambled their way into economic crisis, and encouraged everyone to take on hundreds of thousands of dollars in student loans. - Anthony Pompliano

Right now, it's good to be a hedge fund but just okay to be a human. Consumer finance apps like Robinhood are selling out their users to high frequency trading firms. Hedge funds are flooding into late stage tech deals, delaying IPOs and shutting out retail investors. The cryptocurrency exchange Binance announced they would donate 100% of their crypto listing fees after Laura Shin revealed that they're paid to sell bad securities to its customers. A consistent theme is emerging across traditional and emerging finance: pay to play schemes that benefit large institutions and insiders at the disadvantage of regular users.

At LVL, it's not our job to save the world or even advocate for a specific political or ideological viewpoint. It's our job to advocate for our customers and provide them with a marketplace that's fair. That's why since April 2019, we've operated a new kind of financial market where all market participants are retail customers, liquidity is provided by our customers, and 100% of profits from providing liquidity go to our customers. We believe this gives our users a leg up over using other products that are built to benefit insiders and institutions.

What exactly is liquidity? Market liquidity is the ability of an individual or firm to rapidly purchase an asset without significantly altering the price of the asset. Liquidity involves the price an asset is sold at together with the speed at which the asset can be sold. The design of the marketplace, and who is participating in it, both affect liquidity. For example, a slow marketplace has poor liquidity since the price may change while your trade is being executed. On the other hand, a fast marketplace can also have poor liquidity if few traders are offering competitive prices. In this situation, your trade may execute at a price much worse than the fair market price. That's called slippage.

With anything that's free, you're the product. - Mark Yusko

Liquidity is the defining feature of any marketplace's success and the success of its users. As with any two-sided market, achieving marketplace health requires meeting the needs of both marketplace participants. Retail users select exchanges based on the availability of liquidity. Liquidity providers (LPs) allocate their assets to marketplaces based on the volume of retail transactions. While both parties benefit from participating in the marketplace, the marketplace is not symmetric and, in fact, it provides a structural advantage for the LPs.

Today's marketplaces are built around an asymmetric, two-sided market structure that puts LPs before retail users. But why? Anyone can use an exchange. Retail users have as much money as LPs; they're trading with each other after all. The answer is simple. Exchanges and LPs are monopolizing liquidity providing to maximize the profits they can extract from retail users. While this leads to outsized profits for the exchange and LPs at the expense of retail traders, it also cuts off half of all liquidity to the marketplace by preventing retail users from contributing to liquidity providing. Concentration of supply leads to externalized costs such as inventory squeezes, market manipulation, and platform outages. 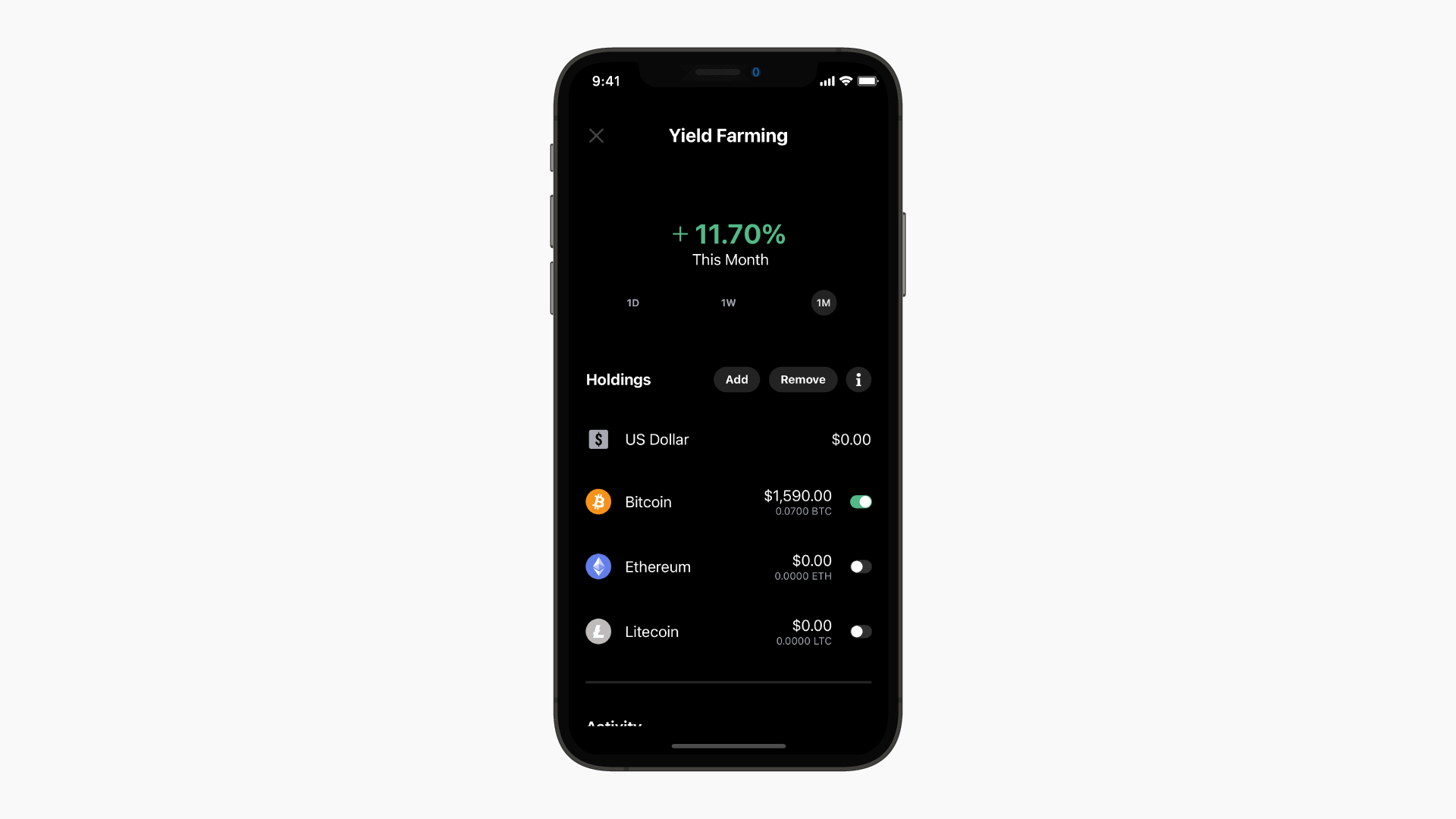 LVL's market structure is designed to provide an even playing field between all market participants. All LVL users can place retail trades. All LVL users can provide liquidity. To expand access to liquidity providing, we built a state of the art algorithm for liquidity providing that any member can subscribe to. We call this investing strategy Yield Farming. Yield Farming accounts are the exclusive providers of liquidity for retail orders on LVL. All Yield Farming profits go to users, and LVL does not take a cut. Here's how it works:

LVL's market structure is a radically new approach for providing liquidity. Liquidity on LVL is not sold from the LP side of the market to the retail side of the market. Instead, liquidity on LVL is a cooperative. All LVL users receive an economic benefit from the availability of liquidity, and all LVL users have the means of providing liquidity through Yield Farming. This eliminates structural handouts to LPs lowering prices for retail users. Because LVL does not take a cut, 100% of the profits derived from providing the economic benefit of liquidity on LVL goes back to the users. This drives a more efficient market structure and maximizes the incentive for people to invest in Yield Farming. Finally, by aligning user assets, orders, and liquidity more efficiently than legacy market structures, it could even lead to a more efficient, more liquid market over time.

Simulations of the earliest version of LVL Yield Farming developed in 2019. Yield Farming has had two major version releases in 2019 and 2020. The next release adds arbitrage to Yield Farming.

Yield Farmers on LVL have serviced over $25,000,000 in orders to date, representing an inventory turnover of 100x. Compared to placing the same orders on Coinbase, which charges a minimum 2.49%, LVL retail users have saved $622,000 trading on LVL. This was made possible by hundreds of Alpha testers who, since April 2019, have run Yield Farming across two different algorithm versions. LVL Yield Farmers and retail users have invested their time and money on a new experimental market structure. This market structure cuts out the middlemen and their fees, gives everyone access to profits from liquidity providing, and may ultimately lead to higher liquidity through expanding access. And it hasn't been without its setbacks, particularly liquidity outages caused by inefficient arbitrage on LVL. As we release arbitrage on LVL, we want to recognize LVL's amazing community of crazy pirates willing to try something new for the better.

This week, we are announcing the public availability of arbitrage, a new opt-in feature of LVL Yield Farming. Arbitrage takes advantage of price differences between LVL and third party exchanges to buy Bitcoin from an external exchange and sell it on LVL for a profit. This change has been in limited beta with a handful of LVL Yield Farming users, and in our limited testing so far we have seen it import substantial additional liquidity to LVL while earning a profit for the test accounts.

Before we go into detail about how arbitrage works on LVL, it's helpful to review what arbitrage is and its role in the healthy functioning of the Bitcoin markets. Arbitrage is the process of simultaneously buying and selling Bitcoin between two different markets using the price difference between the markets to earn a profit. Simply put, if the price of Bitcoin is lower on one marketplace than another, you can purchase Bitcoin on the first market and sell on the second, earning a "spread" from that price difference. While arbitrage is an effective way to earn money for high frequency traders, it also plays a valuable role in balancing inventory of Bitcoin between multiple exchanges. To see this, consider the following example of arbitrage between example exchanges "Exchange 1" and "Exchange 2" which both operate limit order books.

This example illustrates how arbitrage not only generates a profit for the arbitrageur but also plays a critical role in achieving price efficiency and inventory management between multiple Bitcoin marketplaces. Arbitrageurs fulfill a critical function in the Bitcoin markets that ensures good pricing and readily available liquidity for retail traders.

Today, we are pleased to announce the open beta release of arbitrage for LVL Yield Farming. With arbitrage enabled, your Yield Farming account will perform arbitrage on external markets in addition to market making on LVL. Here's how it works:

Arbitrage is available in beta for all LVL users today. Ramping up arbitrage for more users requires us to deposit substantial clearing funds on external exchanges. We will increase the size of these clearing funds over the next several weeks. During that time, you will see the frequency of liquidity outages begin to gradually decrease. As we fund these clearing accounts, we are enforcing a $1000 maximum order size for arbitrage orders, but your AMM may place several orders throughout each day.